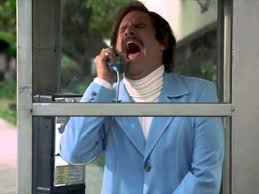 Lately I have been feeling a little like Ron Burgundy; feeling high on life one minute to the lowest of the low the next and then there’s everything in between!

The limbic system is located in the brain on both sides of the thalamus and just under the cerebrum. Some structures within the system include the hypothalamus, hippocampus and amygdala.

Its primary purpose is to support functions such as emotion, behaviour, motivation and long-term memories.

Don’t let the name fool you, it has nothing to do with a hippopotamus, in actual fact it resembles a seahorse! Hippocampus derives from the Latin word hippos meaning horse and kampos meaning sea monster.

Its primary function is the formation of long term-memories. Hippocampal volume is often reduced in people with depression.

Located at the end of the hippocampus, it’s responsible for the response and memories of emotions especially fear. The amygdala is the reason we are afraid of things outside our control. It also controls the way we react to certain stimuli, or an event that causes an emotion, that we see as potentially threatening or dangerous. It attaches meaning to stimuli - for example, the amygdala encode that pain is unpleasant.

What if I told you to squeeze your big toe or thumb next time you are feeling emotional, anxious or fearful? I promise I am not losing my mind!

Reflexology is an ancient Chinese technique that uses pressure points to restore the flow of energy throughout the entire body. The feet provide a detailed and complete map of the body with over 7,000 nerve endings which relate to every part of the body.

The limbic system is located on the big toe and during a reflexology treatment, pressure is applied to the area to help unblock the channel, thus allowing circulation and bringing homoeostasis back to the body as a whole.

A reflexology treatment lasts between 45 and 60 minutes. After a treatment it is advised to drink plenty of water and have something small to eat. You may feel a little tired or head-achy after but the following day you should start to feel the benefits of the treatment including a deeper sense of relaxation, improved sleep patterns and increased energy levels.